I picked up this book because I love reading about people who are different from me. Not a lot of young adult novels feature Muslim protagonists, so I grabbed this as soon as I saw it available the library. 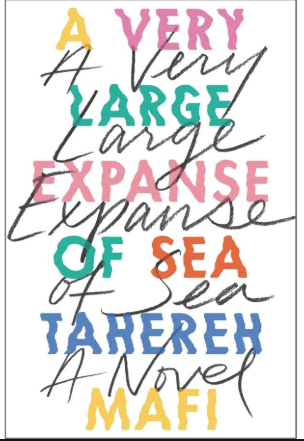 A Very Large Expanse of Sea by Tahereh Mafi

I picked up this book because I love reading about people who are different from me. Not a lot of young adult novels feature Muslim protagonists, so I grabbed this as soon as I saw it available the library.

“It’s 2002, a year after 9/11. It’s an extremely turbulent time politically, but especially so for someone like Shirin, a sixteen-year-old Muslim girl who’s tired of being stereotyped.

Shirin is never surprised by how horrible people can be. She’s tired of the rude stares, the degrading comments—even the physical violence—she endures as a result of her race, her religion, and the hijab she wears every day. So she’s built up protective walls and refuses to let anyone close enough to hurt her. Instead, she drowns her frustrations in music and spends her afternoons break-dancing with her brother.

But then she meets Ocean James. He’s the first person in forever who really seems to want to get to know Shirin. It terrifies her—they seem to come from two irreconcilable worlds—and Shirin has had her guard up for so long that she’s not sure she’ll ever be able to let it down.”

I love that Shirin breaks so many stereotypes. She’s a fashionista and break-dancer. I appreciate the author’s describing the break dance moves for a neophyte like me. I also liked that the author portrayed a varying level of piety. One of my favorite passages was when Shirin’s mother asks her and her brother if they said their prayers, and they lie and say they did. The mom rolls her eyes and says to do better with their afternoon prayers, and they lie and say they will. That’s an exchange a lot of young people can relate to.

If I had met Shirin in real life, her “back off” vibes would have scared me away long before I got to know the wounded heart inside her. Shirin is so disillusioned and bitter she is difficult to like. I have trouble immersing myself in that much anger.

The author mentions Shirin writing in her diary a lot. I wish she had included some of those entries in the book to show her softer, vulnerable side. Without that, getting to know Shirin is like singing Christmas carols to the Wicked Witch of the West. We see more of her inner self later in the book, but I almost didn’t make it that far.

The tough girl falling for a sweet guy is a common theme in young adult literature, but I always have trouble believing the guys are that persistent. Perhaps that comes from being an invisible wallflower in high school. Mafi gets away with it by making Shirin beautiful and stylish and orchestrating the circumstances such that the leading male finds her lack of interest in basketball refreshing. Still, as far as this trope goes, I much preferred Laurie Halse Anderson’s The Impossible Knife of Memory.

The plot’s main asset is an excellent portrayal of the arbitrariness of popularity. I won’t spoil it by including details, but it exposes the hypocrisy of high school (and adult) social circles. Much like real life, the characters transition from social lepers to reigning sovereigns with the speed of a viral video.

The author’s tone was consistent with the protagonist’s voice—short sentences and curt language. Not a style I gravitate to, but well-executed and fitting for the story. The plot moved at an acceptable pace, and I got a decent sense the setting. As Shirin often moved from school to school, I felt it appropriate that the setting didn’t receive too much attention. After so many moves, she wouldn’t care enough to invest in making it home.

The cover image is hard to read, and it doesn’t reveal the premise of the book. I first discovered this book on a recommendations list, so I already knew what it was about, but a browsing reader wouldn’t.

If you are into tough-girl protagonists, or if you have a similar life experience to the main character, then this book is well-written enough to warrant spending money. For shy girls like me who have trouble relating to that type of character, it’s a library read. Either way, worth reading.

*The above links are Amazon Associate links, meaning I earn a small commission if you purchase through them. All opinions are my own.