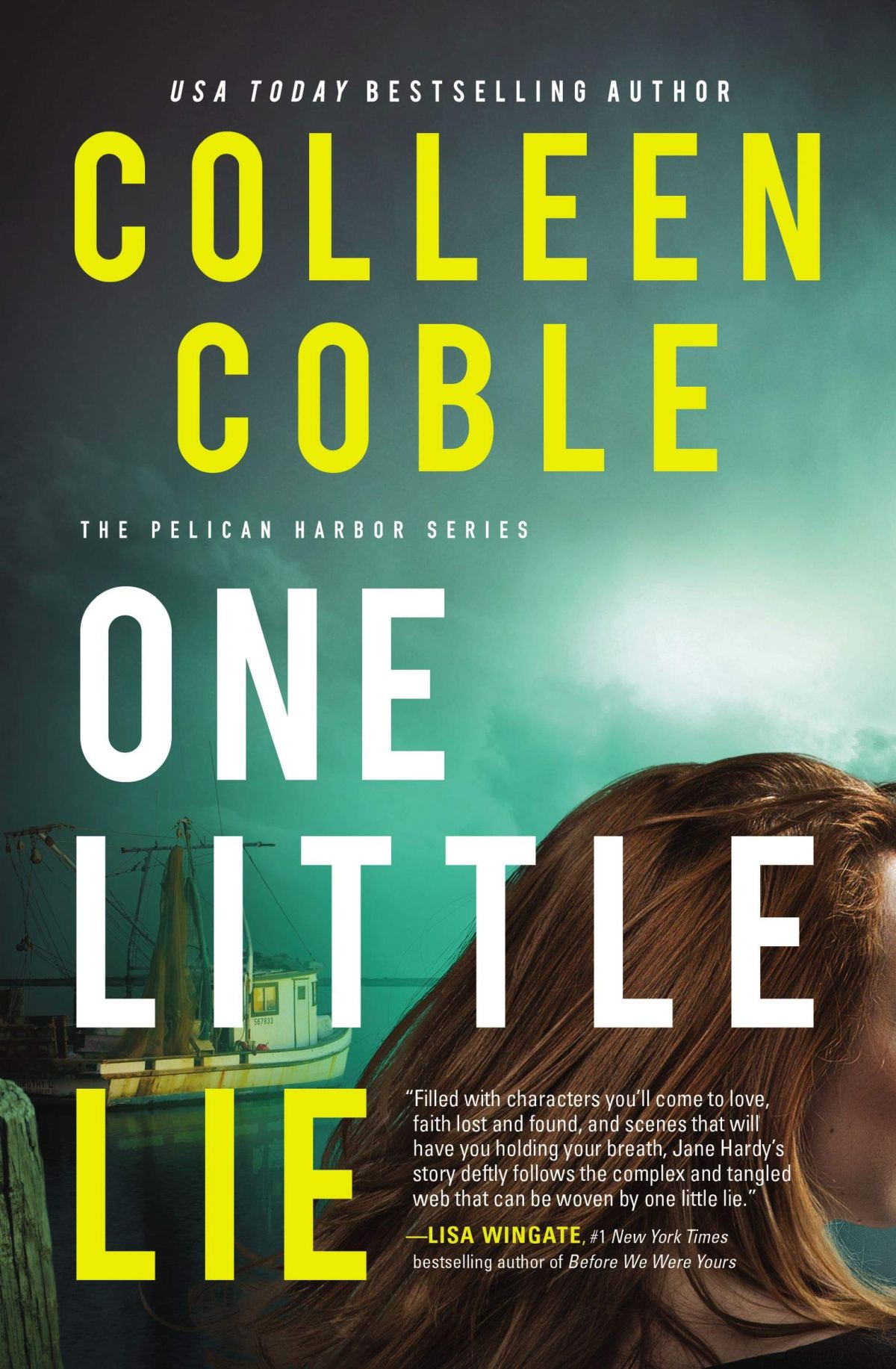 One Little Lie by Colleen Coble

I had overdosed on Kristin Hannah and was looking for a change when I encountered this in the library’s eBook database. I remembered liking another book by this author, though I can’t recall the title now, so I gave it a read.

Upon her father’s retirement, Jane Hardy is promoted to chief of police in Pelican Harbor, Alabama, triggering resentment in one of her deputies. While battling his hostility, she juggles two murder cases and a vigilante, but when FBI arrest her father, he becomes a prime suspect.

Reid Bechtol is famous for his documentaries, especially one he did on cults. His latest involves Jane’s career as a small-town police chief, but his interest is more than professional. His documentaries are personal, and his past intertwines with Jane’s in more ways than she knows.

I appreciate when authors give tough female characters—police officers, swords women, jedi knights, etc.—depth of emotion. I hate female characters that act like men with boobs, but Coble goes way too far with Jane. In Reid’s perspective, he often comments about how tough she is, but the evidence on the page argues to the contrary. Jane is hyperemotional to an embarrassing degree. Her storyline reads too close to a soap opera for my tastes—lots of emotional drama, but reactive and overblown instead of mature and developed.

Reid’s character is better. He is calm, protective, but also respectful of Jane’s authority. Aside from the budding romance with Jane, his major conflict is deciding how to reveal the truth to his son Will. This is where the author fails.

To begin, Will is way too perfect for a teenager. Coble tries to circumnavigate this by remarking how mature he is compared to other teens, but it still rings hollow. There was so much potential for father-son conflict, but instead, Will accepts his father’s errors after a few calm heart-to-hearts.

Reid’s ex rears her ugly head early on, but the book would have been better without her. I understand wanting to add more conflict for Reid, but the author could have done that by having some actual drama with Will.

The characters’ backstories were so obvious I was insulted the author waited until the second third to state them openly. On the flip side, the villain was impossible to guess. Usually in a murder mystery, I like to think “I can’t believe I didn’t see that!” In this story, there were zero clues. I felt cheated.

The prose itself is clunky. Reading felt like driving over a rocky mountain road in a Prius (Yes, I’ve done that. It’s not fun). The author should have fired her line editor. This may not bother most readers, but for me, reading this book felt like resisting the urge to right an askew painting, and I’m not even an editor.

I didn’t know this book was Christian fiction before I checked it out, but it’s low on the preach-o-meter. The sugary-sweet tone that drives me nuts in Christian fiction is limited. Yes, the characters reflect on and practice their faith, but it feels like real people interpreting their circumstances in light of their beliefs. There are no lengthy sermons or moralizing.

If anything, the author should have developed the characters’ religious beliefs more. Religious reflections are dropped into the storyline like breadcrumbs, but they aren’t integrated enough with the narrative. Contrasting Jane and Reid’s beliefs would have added cohesion.

Reid is Christian, but Jane rejected God after her experience in the cult. A close friend (who, like Reid’s ex, isn’t relevant and whose subplot goes unresolved) tries to teach her the difference between the cult and authentic Christianity, but that should have been Reid’s role. Furthermore, their beliefs only affect the personal side of the story, but the author should have contrasted their different interpretations of human behavior.

For example, Reid could have responded to the adulterer with shock and disgust, while lingering cult trauma would reinforce Jane’s skepticism. Contrasting their beliefs would have made their perspectives more distinct and added a fresh take on the crime.

The book’s genre is Christian Romantic Suspense, of which I am not a regular reader, so take my criticisms with a sprinkle of salt. That said, I enjoy well-written books in almost any genre. The premise of a former cult member-turned-police chief intrigued me, and the plot was sufficiently complex. There were many good elements, but none reached their potential.

The female lead was too emotional, the male leads too perfect, the secondary characters irrelevant, and even the police K9 came across as a pet. The backstories were too obvious and the crime impossible for readers to solve on their own. For a book whose cover sports praise from Lisa Wingate, it disappointed.

This is a first-in-series, so I can’t harp on the unresolved subplots, but I won’t read the next book. Had I paid for it, I would have been upset. As is, I’m glad I checked the eBook out from the library so that I didn’t have to waste gas returning a physical copy.

Make your own conclusions: Click the image to purchase from Amazon*

Suspense I recommend instead (though neither is Christian Romantic Suspense)

Shadows in the Water

*The above are affiliate links, meaning I earn a small commission at no cost to you if you purchase through them.

Both books delve into life’s gray areas and provide a glimpse into the unfiltered questions of two hurting and confused young women. Beautifully written and emotionally moving.

Burned and Smoke by Ellen Hopkins

This duology was my first experience with books in verse. I will definitely read more.

Back Cover Description for Burned

“Raised in a religious—yet abusive—family, Pattyn Von Stratten starts asking questions—about God, a woman’s role, sex, love. She experiences the first stirrings of passion, but when her father catches her in a compromising position, events spiral out of control. Pattyn is sent to live with an aunt in the wilds of Nevada to find salvation and redemption. What she finds instead is love and acceptance—until she realizes that her old demons will not let her go.”

Pattyn, the eldest daughter in a large Mormon family, starts questioning her family’s faith. She already wrestled with her “good Mormon father’s” alcoholism, so when teenage hormones hit and she develops sexual feelings, those questions increase. She doesn’t want the traditional role of Mormon mother of as-many-as-possible. When her genuine questions are answered with hypocrisy, she rebels.

While the author portrays Pattyn as a flawed human with sincere questions, Ethan, the boy she meets on the ranch in Nevada, leaves much to be desired. Like many leading males in romance novels, Ethan is too perfect. Good-looking and considerate, he doesn’t struggle as Pattyn does. The romance lacks chemistry at the beginning. There is no reason for Ethan to pursue Pattyn other than her looks, though the author implies otherwise.

Perhaps I am picky, but too-perfect guys annoy me. Ethan comes across as a savior, not a partner.

Ethan comes across as a savior, not a partner.

The story is more character-driven than plot-driven; it centers on Pattyn’s questions about God and love. Poignant and beautifully written poems allow the reader inside her private contemplations as various events shape her beliefs. The plot intensifies dramatically toward the end, which is refreshing but not satisfying. That is why I went straight to the sequel, Smoke after finishing.

Smoke picks up where Burned leaves off, but adds a subplot for Pattyn’s younger sister, Jackie, whose rape is covered up by the LDS community, including her own mother. Smoke built much more suspense throughout the plot, though I don’t think it satisfied the theme of redemption and second loves. Both love stories felt too hasty for me.

I found myself disappointed with the endings. Pattyn questions and rejects her faith, but her new beliefs are ill-defined and center around her love life. She abandons the LDS church to escape their oppressive patriarchy, but then she latches on to Ethan. Perhaps it is because I am religious myself, but I think a boyfriend is a poor substitute for God. I’m not saying she should have converted to another religion, but I wish she had found her own principles, her own foundation that didn’t depend on anyone else, especially not some boy.

A boyfriend is a poor substitute for God.

This is the first I’ve read from Ellen Hopkins, and I adored her writing. Her poems are lyrical without being esoteric. A non-poetry fan could read these books and follow the story with ease. She packs a great deal of power into a few words, especially the poems where she pulls out keywords to form their own sentence. Both Burned and Smoke were beautiful reads.

Burned and Smoke tackle a difficult subject—abuse, rape, and trauma recovery. The content wasn’t too graphic for me, but you must use your own discretion. Both books delve into life’s gray areas and provide a glimpse into the unfiltered questions of two hurting and confused young women. Beautifully written and emotionally moving, each book took only a couple hours to read—one advantage of poetry is brevity. Overall, I would recommend these books, provided you’re not squeamish about the content. I got them as a gift, but I wouldn’t regret spending money on such beautiful writing. Buy both though. Once you finish Burned, you’ll want the closure offered in Smoke.

*The above are Amazon Affiliate links, meaning I earn a small commission if you buy through them.